So, last week (or was it already two weeks ago ???) I found myself at the Dotonbori canal after my shift and by complete chance stumbled on a group of foreigners (I’m pretty sure they were European) that had started some kind of Rugby formation in support of their favorite Rugby team, the night of the Japan-Ireland match.It’s unclear to me whether this particular set of people were supporting Japan or Ireland, but in any case they were sure having a good old time with it. I’m pretty sure I also saw a camera crew show up at a certain point, maybe it could’ve been the local news channel?

I stepped up to the Europeans, thinking I might join in on the fun, and just as I did, there was a loud splash and next thing I know, I see one European in the canal and hear the collective gasp of nearby onlookers.

I wouldn’t normally worry too much about it, but after having so many students tell me year after year about how toxic the water in that canal is, I became genuinely worried about the guy’s health.None of his buddies seemed too concerned about getting him out of the water just yet.They were already busy with putting in place some other formation-like thing (sorry, I know nothing about Rugby, being from America myself) .Only the surrounding locals looked a bit uneasy.I guessed by then that this group must have just gotten to Osaka and knew nothing about our canal’s wretched reputation. 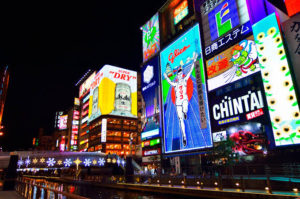 Did I end up helping the guy? Well, at least I tried to.I yelled ‘need a hand?’ While his friends were still at it, but the guy didn’t want any of my help.Actually, it looked like he was fact content staying just where he was.In fact, he was having himself a nice little swim, laughing all his troubles away, unaware of all the radioactive waste probably gnawing away at his bone marrow.

I tried to warn him, shooting him a quick ‘you should probably get out of there, man’ but he didn’t hear me and I didn’t stay long enough to be able to tell you about how the whole thing ended. think of it, I’m not so sure he could even speak English.

In any case, European guy, I hope you’re still alive, that you had a nice little swim, and that you didn’t catch any horrible diseases.

Any OEC students on here reading this? I’ve got a question for you guys.Is the water in the Dotonbori canal really as bad as they all say it is?