With Halloween right around the corner, let’s look at some Japanese urban legends which students have told me about at O.E.C…

Many western horror films have taken heavy influence from Japanese urban legends (都市伝説) (Toshi Densetsu). Is there a reason for this? Yes, because they’re so terrifying. The classic western horror story of chanting “Bloody Mary” into a mirror, or your average banshee story, pales in comparison to some of these. So, strap yourself in, lock all the doors, and put the big light on, it’s about to get scary…

You’re out and about, then suddenly you’re desperate for the toilet. In your haste, you burst your way into the public restroom, and take a seat in the last stall. Big mistake, as this urban legend likes to pick its victims from this exact location. Legend has it, that a mysterious voice will ask you a simple question of “Blue paper? or red paper?”

If you give the answer of “red paper” it will slice your throat until your clothes are stained red with blood! “Well in that case, I’ll just pick blue paper instead!” I hear you say with bated breath. You might want to hold onto that breath, as people picking blue paper will be strangled to death. Picking any other colour will result in you being dragged to the “other side”, so the only safe escape is to not pick any paper, and it’ll let you live.

This urban legend has multiple origins, yet all share the same basic premise. It revolves around a young Japanese high school girl who fell onto the train tracks and was cut in half by an oncoming train. Now a vengeful spirit (or Onryō/怨霊) the girl’s torso haunts people by asking where her legs are.

As her legs are missing, she’s known to travel around on her hands or elbows, so that her torso makes a scratching or “teke teke” sound. Anyone that crosses her path during the night will be sliced in half, mimicking her own disfigurement.

A stranger enters the backseat of a taxi in the middle of the night, and requests that the driver take him to an unheard-of location. The stranger gives the driver directions on the way, becoming increasingly more complex with each turn. As the driver becomes more and more agitated, he’ll turn around to ask the passenger for clarification, only to find the backseat is empty.

Upon facing forward again, the driver will unknowingly drive off a cliff to his death. There are variations of this urban legend in western culture, the most common one being “Killer in the backseat” 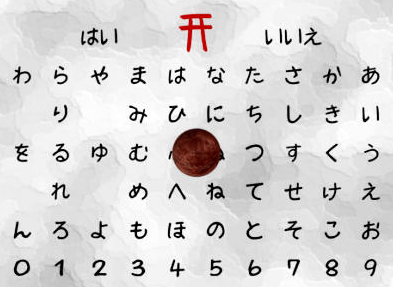 This is the Meji period’s answer to the Ouija board. The name refers to the act, the board, and the spirit (or spirits) possessing the apparatus to speak with the human world. We’ve heard of countless stories and movies which feature Oujia boards, so you get the idea these things aren’t intended to be taken lightly. Many people believe some deaths have been connected to Kokkuri by not “finishing” the rituals properly.

I’ve saved the best (worst) until last. This one has a rich history and an in-depth backstory. This is the urban legend of the split mouthed woman (Kuchisake-onna/口裂け女) which originated around 1979 from the Nagasaki prefecture, after a woman was horrifically mutilated by her husband. This vengeful spirit is known to wear a long trench coat and surgical mask, worn in Japan to protect people from colds and illnesses. Oh, and she also brandishes an oversized pair of scissors.

She’s rumoured to approach people (mainly children) walking alone at night and asks the question “Do you think I’m beautiful?” If they answer “No.” then she introduces you to her oversized scissors, and its game over! If you say “Yes.” she removes her mask to reveal her disfigured face, and her mouth has been slit from ear to ear. She’ll then ask the same question again. If for some twisted reason you say “Yes.” again, then she uses her scissors to cut your face in a similar fashion to hers. If you think you’ll be safe by saying “No.” then think again, as she’ll be upset and kill you. I guess this is a lose-lose situation.

Apparently, the only way to escape is by giving a neutral answer (such as “You’re so-so”) as this will confuse her and give you enough time to escape. You can also use sweets to distract her, because who doesn’t love sweets?

Those are just some of the many Japanese urban legends which exist in folklore. Feel free to have a quick look on Google and I’m sure you’ll find hundreds, some even more bizarre than the ones above!

Some these legends also have movies and TV shows based on them. While others have been adapted slightly for other cultures. Check them out for yourselves and let me know your favourites the next time we have a lesson together.