If there’s one thing the Japanese people are known for, it’s their all or nothing attitude. Every Japanese person I’ve met strives to be the best at what they do. This mentality bleeds into the world of sports too. So, what is my favourite Japanese sport? Baseball? Football? Nope… It’s wrestling! （プロレス） All too often on televised American wrestling you’ll hear a crowd erupt when the entrance music of their favourite wrestler hits, followed by a chant in unison for that superstar. Throughout the match, there will be chants for the wrestler, or chants for their finishing move.

In Japan however, this doesn’t really happen so often. Japanese crowds are famous for being silent as they get absorbed into the match. The only times they’ll break that silence is during the entrances, and during a chain of moves (Chain wrestling being a sequence of back and forth traditional moves such as chin locks, reversals, take downs etc.) This is usually followed by a sharp round of applause before snapping rapidly back into silence. 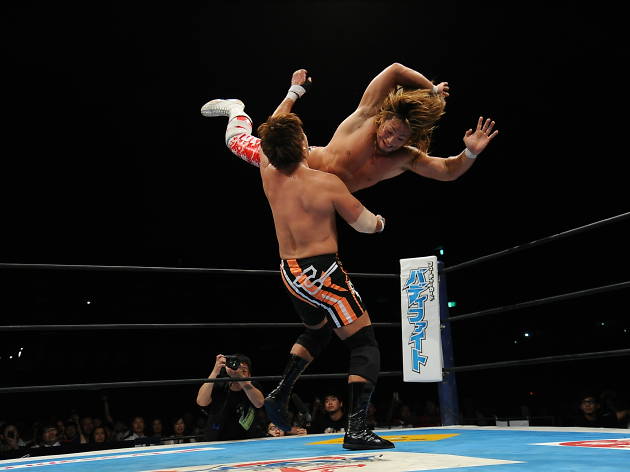 Japan is known around the world for its “Strong Style” wrestling. This means the kicks and punches are done with more force than usual, for that high impact sound, and realism. Yes, they’re really hitting each other. Obviously exchanges like this can’t happen too frequently, otherwise both wrestlers would be broken by the end of the match. However, throughout the match, in-between the high flying moves and big suplexes, moments like this help make the match ups more believable.

There’s a large focus on traditional Greco-Roman wrestling too (The kind you see in the Olympics), with many bouts between the older wrestlers having a very strong grappling undertone to them. The submission holds are loose enough as to not seriously injure their opponent, yet at the same time done with some force to make it look painful and realistic.

In America (especially on WWE programming) these traditional holds are held very loosely, and it’s up to the opponent receiving the hold to “sell” (making the move look painful) as best as possible. This strong style is the reason why Japanese wrestlers are heralded as being some of the toughest men and women in the industry. Mainly because they can take one hell of a beating.

The Stipulations
Japanese wrestling has slightly different rules to those seen in the west. It’s common on American TV wrestling to see a wrestler thrown to the outside area and being given to the count of 10 to get back into the ring, or risk being counted out and losing the match.

In Japan, these counts last up to 20 as they add more tension and give the wrestlers time to perform huge diving moves from the ring to the outside.
Similarly, a lot of wrestling promotions have time limits, with wrestling matches ending in a draw.

Respect
At the heart of these brutal chops, vicious kicks, and suplexes, lies the important factor of respect. Being able to take multiple chops to the chest is an initiation, taking a strong kick shows your toughness, and wrestling a rookie shows respect.

Did you watch wrestling as a kid? Do you remember legends like Antonio Inoki （アントニオ猪木） and Rikidozan （力道山）? How about wrestlers of today like Hiroshi Tanahashi （棚橋弘至）? Let me know next time we have a lesson together!